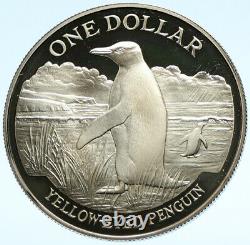 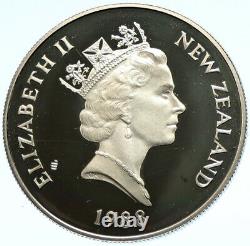 Item: i104047 Authentic Coin of. Under Queen Elizabeth the II of Great Britain Yellow-eyed Penguin - Native Birds Series 1988 Proof Silver Dollar 38.8mm (27.20 grams) 0.925 Silver 0.8094 oz. ONE DOLLAR YELLOW-EYED PENGUIN, Yellow eyed Penguin facing left in a typical shoreline situation. To the right, in the distance, another penguin facing away. , known also as hoiho or tarakaka, is a species of penguin endemic to New Zealand. Previously thought closely related to the little penguin. , molecular research has shown it more closely related to penguins of the genus. Like most other penguins, it is mainly piscivorous. The species breeds along the eastern and south-eastern coastlines of the South Island of New Zealand, as well as Stewart Island, Auckland Islands, and Campbell Islands. Colonies on the Otago Peninsula are a popular tourist venue, where visitors may closely observe penguins from hides, trenches, or tunnels. On the New Zealand mainland, the species has experienced a significant decline over the past 20 years. On the Otago Peninsula, numbers have dropped by 75% since the mid-1990s and population trends indicate the possibility of local extinction in the next 20 to 40 years. While the effect of rising ocean temperatures is still being studied, an infectious outbreak in the mid 2000s played a large role in the drop.

Human activities at sea (fisheries, pollution) may have an equal if not greater influence on the species' downward trend. New Zealand is situated some 1,500 kilometres (900 mi) east of Australia across the Tasman Sea and roughly 1,000 kilometres (600 mi) south of the Pacific island areas of New Caledonia, Fiji, and Tonga.

Because of its remoteness, it was one of the last lands to be settled by humans. During its long period of isolation, New Zealand developed a distinct biodiversity of animal, fungal and plant life. The country's varied topography and its sharp mountain peaks, such as the Southern Alps, owe much to the tectonic uplift of land and volcanic eruptions. New Zealand's capital city is Wellington, while its most populous city is Auckland.

Sometime between 1250 and 1300 CE, Polynesians settled in the islands that later were named New Zealand and developed a distinctive Maori culture. In 1642, Dutch explorer Abel Tasman became the first European to sight New Zealand. In 1840, representatives of Britain and Maori chiefs signed the Treaty of Waitangi, which declared British sovereignty over the islands.

In 1841, New Zealand became a colony within the British Empire and in 1907 it became a Dominion. Today, the majority of New Zealand's population of 4.7 million is of European descent; the indigenous Maori are the largest minority, followed by Asians and Pacific Islanders. Reflecting this, New Zealand's culture is mainly derived from Maori and early British settlers, with recent broadening arising from increased immigration. The official languages are English, Maori and New Zealand Sign Language, with English predominant.

When should I leave feedback? Please don't leave any negative feedbacks, as it happens sometimes that people rush to leave feedback before letting sufficient time for their order to arrive. The matter of fact is that any issues can be resolved, as reputation is most important to me.

My goal is to provide superior products and quality of service. How and where do I learn more about collecting ancient coins? Visit the Guide on How to Use My Store. For on an overview about using my store, with additional information and links to all other parts of my store which may include educational information on topics you are looking for. This item is in the category "Coins & Paper Money\Coins: World\Australia & Oceania\New Zealand".