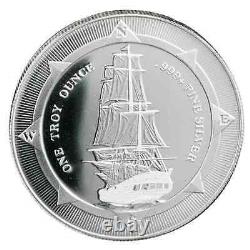 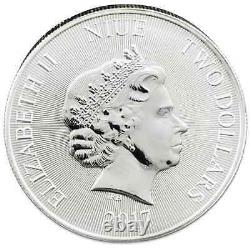 Up for your consideration is this 2017 New Zealand HMS Bounty 1 ounce. THESE ARE VERY LIMITED SILVER COINS SO GET YOURS NOW WHILE THEY ARE AVAILABLE! The content and purity of the NZ Bounty are identical to those of the silver American Eagle, yet premiums on this exciting new issue are much lower. The NZ Bounty is also priced lower than the Australian Kangaroo, Austrian Philharmonic, British Britannia, Canadian Maple Leaf, Chinese Panda, or any other legal tender coin available. The NZ Bounty is not only an outstanding value in legal tender silver, it's also a spectacular coin.

It's weight, purity, and legal tender status are backed by the Reserve Bank Of New Zealand, the official bank of New Zealand. She was sent to the pacific under command of William Bligh to acquire breadfruit plants from Tahiti and transport them to the British West Indies in hope of producing edible harvests.

The mission was aborted in April 1789 following a mutiny led by acting Lieutenant Fletcher Christian. This was the famous mutiny on the Bounty, subject of three films including the 1935 classic starring Charles Laughton and Clark Gable.

The remains of the Bounty were discovered in 1957, and various parts have been salvaged. Though it's service was short and it's end tragic, The Bounty remains a bold symbol of the global quest for wealth and prosperity. The New Zealand Mint has been producing legal tender coins, bullion, and collectible medallions for more than four decades. New Zealand's only precious metals mint, it prides itself on high quality design and production. Was specifically produced for the south Pacific island of Niue (NEW-ay), a self-governing state in free association with New Zealand; its residents are New Zealand citizens, and New Zealand conducts most diplomatic relations on its behalf.

This coin is available for a limited time so get yours now while they are available! Products in uncirculated condition exhibit no signs of wear and tear, though minor coining flaws are possible such as breaks in the luster, spotted surfaces, and contact marks. Thank you very much for looking at our listings!