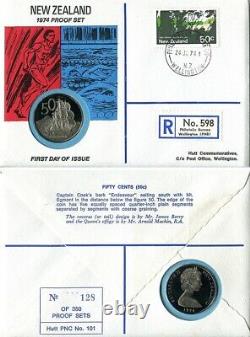 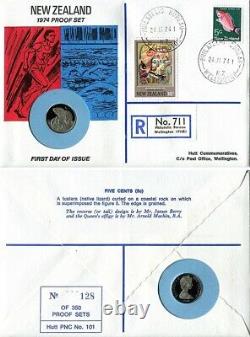 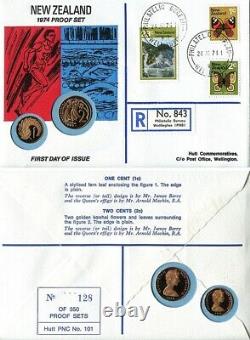 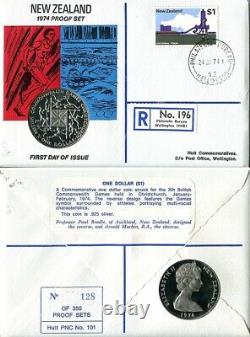 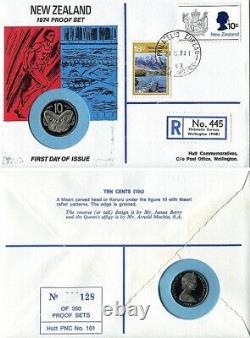 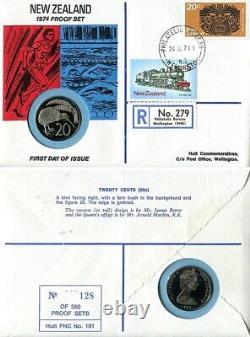 That company, making PNCs as Pacific Commemoratives, last issued Hutt-numbered PNCs in 1978. This PNC set consists of six PNCs containing the seven coins from the New Zealand 1974 proof set (KM# PS15). The coins were made at the Royal Australian Mint at Canberra; and the number of proof sets made was 8,000. Each cover has one or more New Zealand stamps, with at least one stamp on each cover matching the denomination of the coin in that PNC. Hutt originally issued their PNCs with vinyl envelopes to protect them.

However, the vinyl used deteriorated and could damage the PNCs. This PNC was removed from the vinyl envelope and it has been stored in a glassine envelope. Another problem that Hutt had with their PNCs was that the glue eventually soaked through the front and/or back of the envelope.

That glue was used to affix the sealed coins in position in the PNCs. Therefore, a number of the PNCs show the glue. These PNCs contain the following stamps. New Zealand Coat of Arms and Queen Elizabeth II Bust. Passchenendaele Ab Class Steam Locomotive.

The coins in the PNCs were removed from the original case and then sealed in Pliofilm (or similar) before they were inserted into each of the envelopes. The coins contained in the mint set are. These coins have a common obverse containing a Machin head bust of Queen Elizabeth II facing right. The reverse side of each coin is described in the table above. The numeric value of each coin is in the depictions, except for the one dollar coin where it is in text by the border at the bottom.

Back of 1 dollar envelope along right side of flap, and near the upper left corner. This item is in the category "Coins & Paper Money\Coins: World\Australia & Oceania\New Zealand". The seller is "daveemlen" and is located in this country: US.

This item can be shipped to United States.