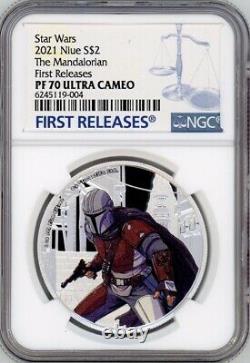 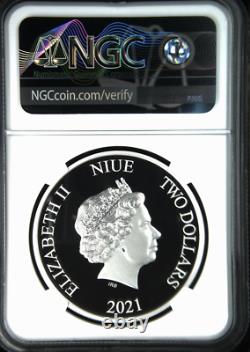 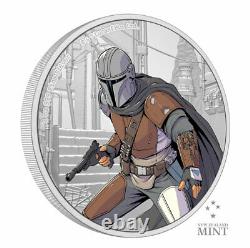 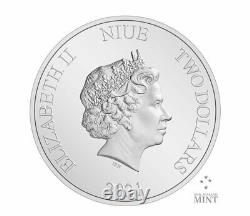 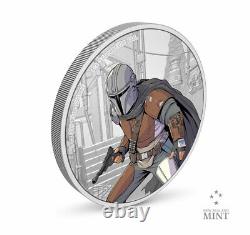 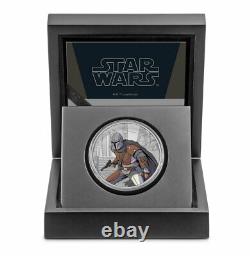 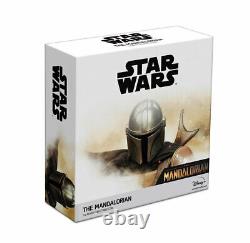 The Mandalorian is the main character on the smash hit television series of the same name airing on the Disney+ on demand service. As most fans know, its kind of like the Wild West in space and takes place in a timeline that occurs between the original Star Wars films and the newest trilogy.

In the television show, the gunslinging Mandalorian has been hired by remnants of the fallen Galactic Empire to track down an infant referred to simply as The Child. Instead, the tough, gruff and no-nonsense bounty hunter becomes the adoptive father of the green little tot and protects him from the Imperials. Now you can make the Mandalorian part of your collection thanks to this exciting coin the first release in the New Zealand Mints Star Wars Mandalorian series! The Mandalorian Is Poised To Become Part Of Your Collection.

Struck in a full ounce of highly pure 99.9% fine silver, this coin is truly an out-of-this-world collectible. It features a colorized depiction of the Mandalorian in an urban setting posed in full crouch, his laser blaster drawn ready to shoot it out with anyone who gets in his way. When you get this coin home and hold it in your hands, youll almost hear the Mandalorian utter one of his famous lines like. I can bring you in warm, or I can bring you in cold! Plus, each coin will come beautifully housed in its original mint packaging, which consists of a premium black box slipped inside a Mandalorian-branded outer box and accompanied by a Certificate of Authenticity.

These coins are also officially licensed by Lucasfilm Ltd and have a maximum worldwide limited edition of just 2,000. With the incredible popularity of the show and the already huge Star Wars fan base to begin with, that mintage seems far too small to accommodate the thousands upon thousands of people who like to own one of these coins. NGC CERTIFIED PF70 ULTRA CAMEO FIRST RELEASES. FIRST RELEASE IN STAR WARS MANDALORIAN SERIES This coin is the first release in the New Zealand Mints Star Wars Mandalorian coin series based on the Disney+ television show.

It shows the programs title character in full color on the reverse while the obverse features the effigy of Queen Elizabeth II. OFFICIALLY LICENSED These coins are officially licensed by Lucasfilm Ltd. STRUCK IN HIGHLY PURE SILVER Each Star Wars Mandalorian Colorized Proof was struck by the New Zealand Mint in a full ounce of highly pure 99.9% fine silver and measures 40 mm in diameter.

This item is in the category "Coins & Paper Money\Coins\ World\Australia & Oceania\New Zealand". The seller is "elitecoinage" and is located in Boca Raton, Florida. This item can be shipped to United States.