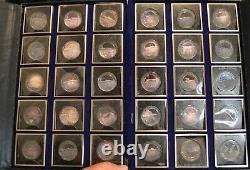 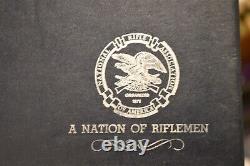 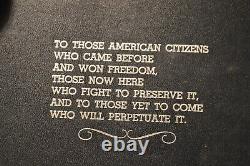 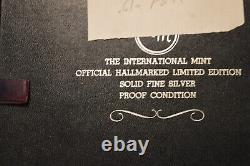 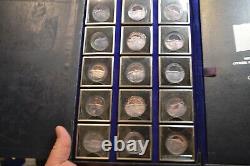 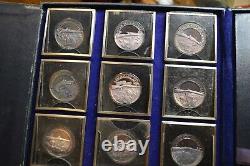 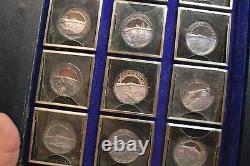 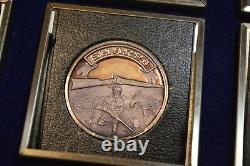 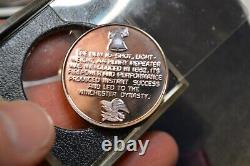 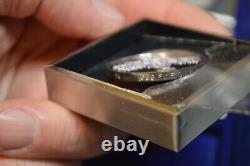 999 fine silver proof medallions. Issued in late 70's. There are 30 solid silver proofs depicting great guns of history and comes in an album.

The detailing on these coins is fantastic. 999 fine silver and is about 21 grams, or ¾ of an ounce and is about the size of an old half dollar only a little thicker.

Stamped on the rim of each medal are. 999 fine silver and also the number of the set issued. This was a limited edition set {I believe 4000 world wide}and came from the International Mint. This is a fantastic addition to any NRA. Gun, coin, or silver collection. It is very rare and very beautiful. The front of the album has the NRA insignia and the title "A NATION OF RIFLEMAN".

The album opens up into two halves and is lined with a blue velvet type material. Each half has 15 of the proofs and each medal has its own removable 2inch by 2-inch case. The medals are protected with a plastic cover.

The face of each medal has a 3D look and the back has the Liberty Bell, the NRA eagle, and a statement about the gun. The following is a list of the guns depicted in this collection.

This item can be shipped to United States.
silverrareproofbatmanwarszealandfineanniversarydisneycomicsseriescollectionmintagemousecoinstarsupermanposterbackcolorizedreleasesfirstfoilpf70kiwicoin-mintlordmadecoinsringschibiniuedollarmandalorian