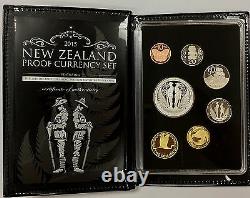 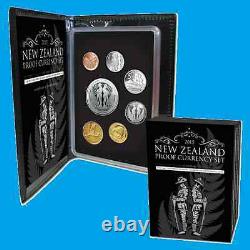 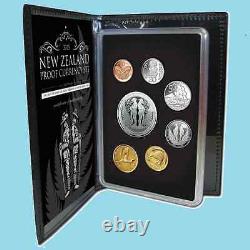 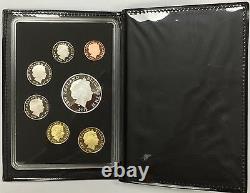 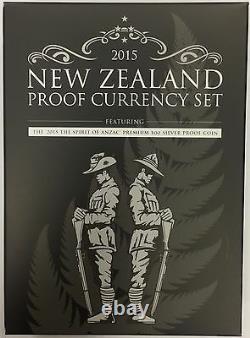 To commemorate 100 years of the Anzac spirit, this currency set includes two special Anzac coins - the'2015 The Spirit of Anzac' premium silver proof coin and a unique non-colour proof version of the'2015 The Spirit of Anzac' commemorative circulating 50-cent coin. Pre-order yours for early August 2015. New Zealand's decimal currency was introduced in 1967 when New Zealand moved from the New Zealand pound to the New Zealand dollar. The current circulating coins are the 10-cent, 20-cent, 50-cent, one-dollar and two-dollar coins - and all are available in stunning proof quality in this beautifully presented circulating currency set.

Each coin is specially dated 2015, making this set a unique collectable to mark the centenary of the Gallipoli campaign. The coins represent Aotearoa New Zealand's unique culture, history and identity, and with just 1,000 sets available they won't last long. The 10-cent coin is the lowest denomination coin in New Zealand currency, and replaced the New Zealand shilling coin in 1967. As part of changes to New Zealand currency in 2006, the circulating coin became smaller and is now made of copper-plated steel. The reverse features a koruru (carved mask) with heke (rafter) patterns.

When introduced in 1967 the 20-cent piece replaced the New Zealand florin coin. Initially the coin featured a kiwi, but this was changed in 1990 to a carving of Pukaki, a well known chief of the Ngati Whakaue tribe. When the silver decimal currency was changed in 2006, the 20-cent piece was redesigned with a'Spanish flower' milling. The largest denomination of the original decimal coins, the 50-cent piece replaced the crown coin (five shillings) in 1967. 2015 The Spirit of Anzac' commemorative 50-cent coin.

In March 2015 to commemorate 100 years of the Anzac spirit, the Reserve Bank of New Zealand (with New Zealand Post) released this special commemorative circulating coin. Just one million coins were produced and they were eagerly snapped up by the New Zealand public. This currency set is the only way to obtain the exclusive non-colour proof version of this coin. The New Zealand one-dollar coin was introduced in 1991 to replace the one-dollar note. The reverse features New Zealand's iconic kiwi surrounded by silver ferns. The kiwi was promoted from its position on the 20-cent coin to bring to life the well known term'Kiwi dollar'. The two-dollar coin was introduced in 1991 when the two-dollar note was retired. The reverse features a kotuku (eastern great egret, or white heron), which is held in high regard in Maori culture. Kotuku are considered to embody rarity, grace and beauty and are considered inhabitants of the spirit world. The Spirit of Anzac in 1oz silver. To make this set extra special, we've also included the'2015 The Spirit of Anzac' premium silver proof coin. Minted from 1oz of silver, the design is a detailed replica of the 50-cent commemorative circulating coin, and adds a unique touch to this collectable currency set. 2015 The Spirit of Anzac Premium 1oz silver proof coin.

New Zealand and Australian soldiers with mangopare and silver fern. 10,000 (9,000 available individually and 1,000 as part of the 2015 New Zealand Proof Currency Set). Milled with a channel with ten raised beads.

The HMS Endeavour with Mount Taranaki (Egmont) in the distance. A carving of an 18th century Maori leader called'Pukaki.

A Maori carved mask or'koruru' with Maori rafter patterns. This item is in the category "Coins & Paper Money\Coins: World\Australia & Oceania\New Zealand". The seller is "silvergoldbullion" and is located in this country: NZ.