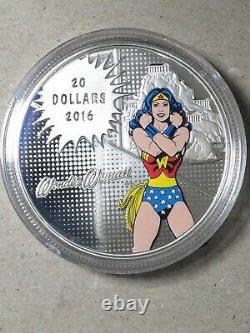 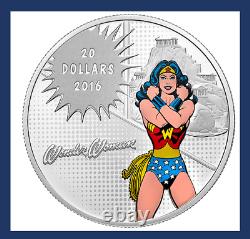 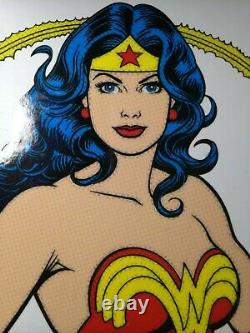 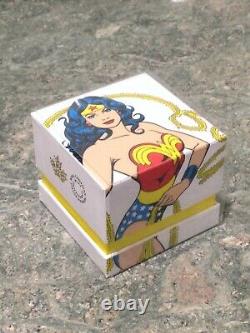 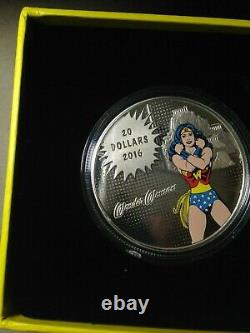 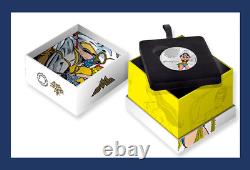 Photo is representative of what you will receive, but may not be the exact coin. Add the Amazing Amazon to your collection!

The DC Comics Originals series has a classic, slightly retro style, recalling the look most comic book fans grew up with and remember fondly. Basing itself on the DC Comics style of the 1980s, this series celebrates one of the most established looks for the DC Comics pantheon of Super Hero's and includes the amazing Amazon warrior princess, Wonder Woman. The application of blue, red and yellow colors over the detailed engraving recreate her iconic costume and symbol, particularly the yellow of her tiara and the Lasso of Truth carried on her hip. She stands before a partial view of her home island, Themyscira a.

The classic Wonder Woman logo is also included in your coin's design. A laser halftone pattern adds a modern graphic element that fills the background while infusing the entirety of the design with a classic comic book feel.

Wonder Woman is a pillar of strength as she stands with her bracelets crossed, ready to deflect anything that may come her way. Behind her is an engraved view of her island home Themyscira, a. Paradise Island, while the classic Wonder Woman's logo is engraved to her left. As an Amazon warrior, Diana is well versed in different forms of combat, including archery and martial arts!

Wonder Woman's Lasso of Truth compels anyone bound by it to speak the truth! Despite having the ability to fly, Wonder Woman also has an invisible jet, which is a staple in her arsenal!

The amazing Amazon has heightened senses, allowing her the speed and agility to deflect bullets with her indestructible bracelets! Your coin is encapsulated and presented in a Royal Canadian Mint-branded premium graphic case. DC Comics (reverse), Susanna Blunt (obverse). This item is in the category "Coins & Paper Money\Coins: World\Australia & Oceania\New Zealand". The seller is "mongojacksonfranklin" and is located in this country: US. This item can be shipped to United States.