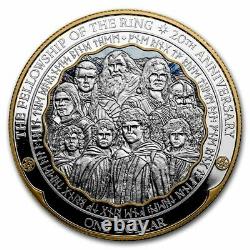 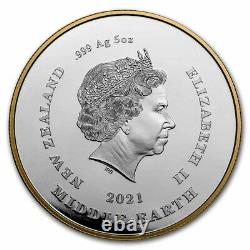 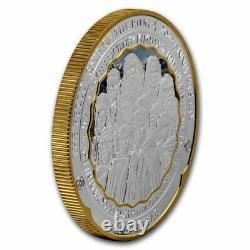 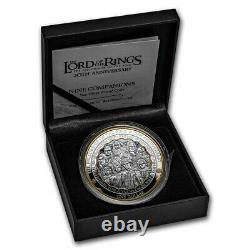 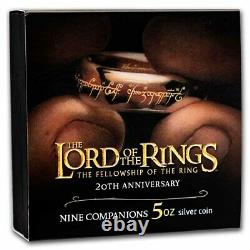 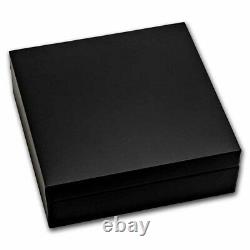 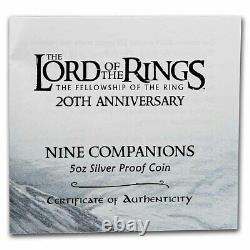 2021 New Zealand 5 oz Silver Nine Companions Proof - SKU#237848. Photos in this listing may or may not be stock photos. The photos are meant to be an indication of the product you will receive. Worldwide mintage of 700 coins. Comes in a themed box and with a certificate of authenticity. Obverse: Portrait of Her Majesty Queen Elizabeth II. Included are the inscriptions for the year of issue, fineness and weight of the coin, country of issue and the words Middle Earth. Reverse: Features an image of the Nine Companions; ringbearer Frodo Baggins and his gardener Sam Gamgee, the wizard Gandalf, the elf Legolas, the dwarf Gimli, the men Aragorn the ranger and Boromir of Gondor, and the two young hobbits Merry Brandybuck and Pippin.

Around the edge of the coin are the inscriptions The Fellowship of the Ring and 20th Anniversary. Included on the coin is some hidden text. Sovereign coin backed by the New Zealand government.

Handle your coins with care by adding these cotton gloves. Celebrate the 20th Anniversary with this proof coin. Add this Silver 5 oz Companion coin to your cart today! The Lord of the Rings The first movie. In this epic series was released in 2001 with a subtitle of The Fellowship of the Ring.

The movie is based of J. Tolkien's novel which was first published in 1954.

They are the official issuer of New Zealand legal tender commemorative coins in partnership with the Reserve Bank of New Zealand. Their coins reflect New Zealand's people, place, history, heritage and culture and highly collectible with low worldwide mintages. 1,359 Item as described. Rec'd item, looking forward to doing business with again. This item is in the category "Coins & Paper Money\Coins: World\Australia & Oceania\New Zealand".

The seller is "apmex" and is located in this country: US. This item can be shipped worldwide.