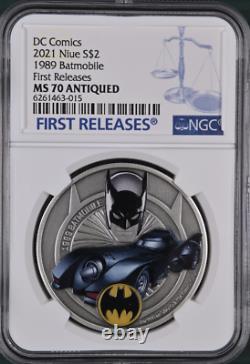 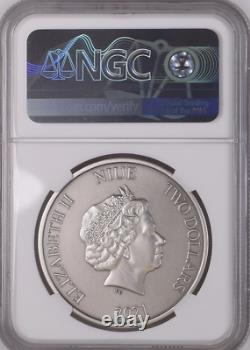 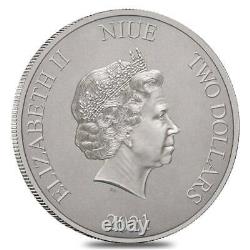 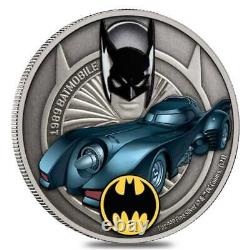 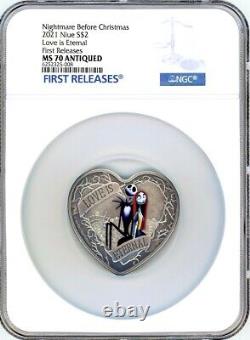 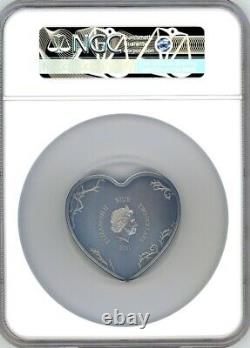 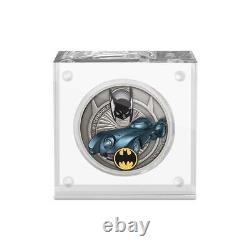 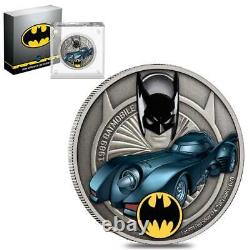 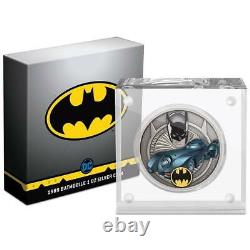 But one of the most popular and iconic characters from the film wasnt among those cast members. In fact, it wasnt even a living actor. It was the Batmobile The Dark Knights most famous weapon in his crime-fighting arsenal. And now the Batmobile as it appeared in the 1989 film has roared back to life on this limited edition coin from the prestigious New Zealand Mint! Struck in a full ounce of highly pure 99.9% silver, this spectacular coin shows the sleek crime-fighting vehicle as if it has just chased down a gang of thugs. Its also colorized in vibrant steel-blue with a black-and-yellow BATMAN logo below and a grim-looking bust of the Dark Knight himself hovering above. To add an even more dramatic element to this bat-tastic coin, its been generously layered with a unique Antique finish.

The dark and light blackness of the antique finish creates a contrast and touch of nighttime adventures. And, because antique finishes such as this are typically applied by hand, it means that no two coins are exactly alike! Holy Not Enough To Go Around, Batman; thats an extremely small mintage especially when you take into consideration of how popular Batman is around the world!

Plus, each coin available here comes beautifully housed in its original mint packaging that consists of a premium acrylic display case stored inside a Batman-branded outer box and accompanied by a mint-issued Certificate of Authenticity. NGC CERTIFIED MS 70 FIRST RELEASES - PERFECT GRADE. THE 1989 BATMOBILE RIDES AGAIN This coin pays tribute to the Batmobile from the 1989 film.

The sleek crime-fighting vehicle is colorized in vibrant steel-blue. A black-and-yellow BATMAN logo is seen below and a grim-looking bust of the Dark Knight himself hovers above. The coins obverse features a portrait of Queen Elizabeth II. UNIQUE ANTIQUED FINISH These 2021-dated 1989 Colorized Batmobile coins have been generously coated with a unique antique finish. Typically applied by hand, that means not two coins are alike.

This item is in the category "Coins & Paper Money\Coins\ World\Australia & Oceania\New Zealand". The seller is "elitecoinage" and is located in Boca Raton, Florida. This item can be shipped to United States.