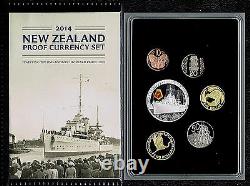 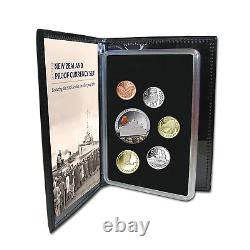 In 2014 the New Zealand Proof Currency Set is being released alongside the HMS Achilles silver proof coin. The set is a great way to commemorate the 75th anniversary of the Battle of the River Plate, and with only 1,000 sets available it won't last long.

The currency coins in this collectable set represent Aotearoa's unique culture, history and landscape. New Zealand's national identity is evident in each design - from the M? Portrait of Her Majesty Queen Elizabeth II by Ian Rank-Broadley, United Kingdom.

Portrait of Her Majesty Queen Elizabeth II by Ian Rank-Broadley England. With Mount Taranaki (Egmont) in the distance. A carving of an 18th century M? Ori carved mask or'koruru' with M?

Other options available as well, please ask. All our orders are dispatched between Mondays to Thursday (except public holidays). Customers should satisfy themselves that any item choice made is suitable for their intended purpose or use.

You may also be interested in.... This item is in the category "Coins & Paper Money\Coins: World\Australia & Oceania\New Zealand". The seller is "silvergoldbullion" and is located in this country: NZ. This item can be shipped worldwide.