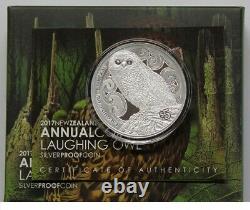 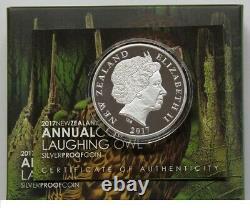 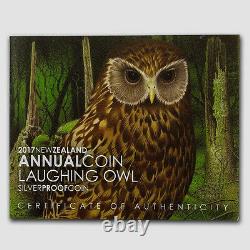 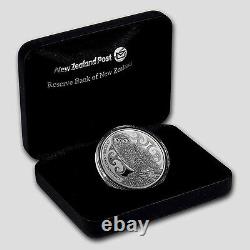 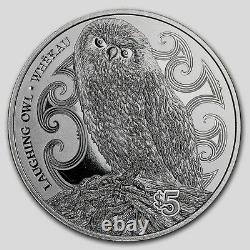 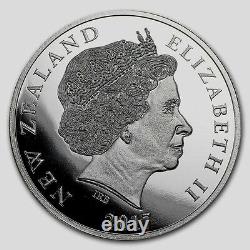 2017 New Zealand Annual Coin: Laughing Owl Silver Proof Coin. The laughing owl, so named for its raucous cry of repetitive shrieks, was a common sight in the South Island in the mid 1800s. However, the laughing owl had no defence against predators, and the introduction of stoats and ferrets from the 1880s is believed to have led to the extinction of this beautiful nocturnal bird. The robust form and detailed feathers of the laughing owl have been cleverly captured in Dave Burkes design of this 1oz silver proof coin.

The korus in the background represent the forests in which the owl dwelled and the domain of Tane, God of the Forest. The English name for the laughing owl as well as the Maori name whakau, can be seen clearly printed following the curvature of the coin. This 1oz silver proof coin minted from 0.999 silver brings the memory of the laughing owl back to life in this stunning representation. Each coin is accompanied by an individually numbered certificate of authenticity, and displayed in an elegant black leatherette case Denomination. Portrait of Her Majesty Queen Elizabeth II by Ian Rank-Broadley, United Kingdom.

The item "New Zealand 2017- 1 OZ Silver Proof Coin- Laughing Owl Whekau" is in sale since Tuesday, December 20, 2016. This item is in the category "Coins & Paper Money\Coins\ World\Australia & Oceania\New Zealand". The seller is "silvergoldbullion" and is located in North Canterbury. This item can be shipped worldwide.