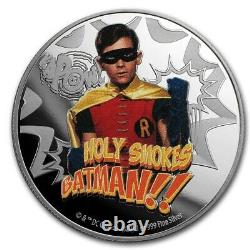 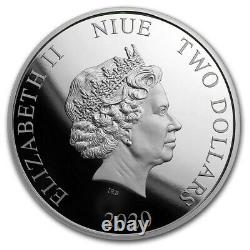 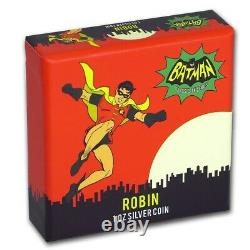 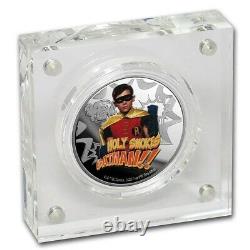 66 1oz Silver Coin shows ROBIN. In full colour in a fighting stance, along with one of his infamous sayings Holy Smokes Batman!! Completing the design is a background of engraved starbursts, in-keeping with the series iconography, along with the iconic words KAPOW. The obverse features the Ian Rank-Broadley effigy of Her Majesty Queen Elizabeth II and the coin is legal tender in Niue. The coin is packaged in a magnetised acrylic block so it can be easily displayed or removed as needed. It fits snugly inside an outer box which shows a cartoon ROBIN on the top and the BATMOBILE. Shining over the GOTHAM CITY. BATMAN and ROBIN can be seen scaling the sides! A limited-edition coin, this is pop art delight. Its uniquely numbered Certificate of Authenticity is found inside the packaging and confirms the coin as part of a worldwide mintage of only 1,966. If you are nostalgic for the Boy Wonder, then make sure you dont miss out on this third coin in the collection. Coin Metal: 999 Fine Silver. Coin Weight: 1 Troy oz.

In this series - BATMAN's faithful (if overly eager) partner. The show introduced new audiences to the crimefighting capers of the Dynamic Duo, BATMAN and ROBIN. During its first season, it was one of only two prime-time TV series to be broadcast twice in one week, with the first episode always containing a cliffhanger ending and the voice over: Tune in tomorrowsame Bat-time, same Bat-channel! The cheery campiness of this live action situation comedy was an unexpected success for the TV network.

The item "Niue 2020 1 OZ Silver Proof Coin BATMAN 66 ROBIN" is in sale since Sunday, February 16, 2020. This item is in the category "Coins & Paper Money\Coins\ World\Australia & Oceania\New Zealand". The seller is "silvergoldbullion" and is located in Auckland. This item can be shipped worldwide.