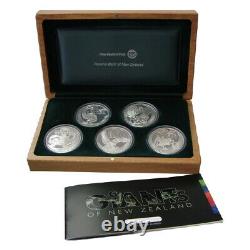 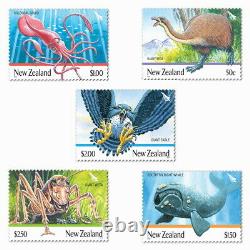 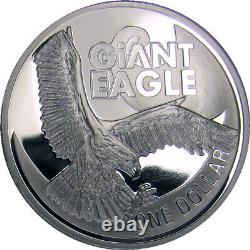 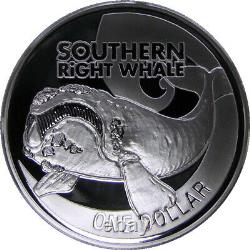 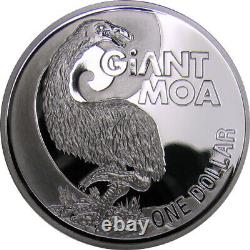 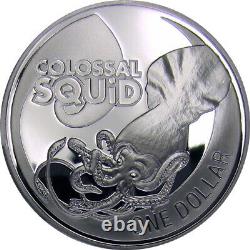 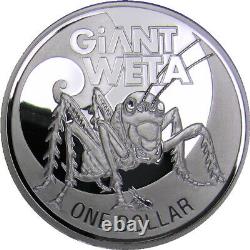 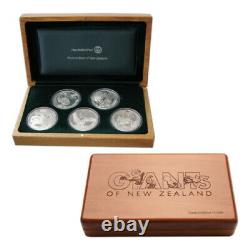 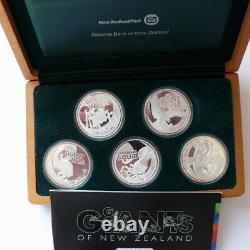 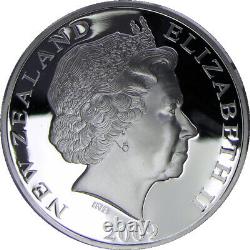 Get this unbelievable and low-mintage coin & stamp set. Five different giants - Haast's Giant Eagle, the Giant Moa, Colossal Squid, Southern Right Whale, and Giant Weta - some extinct, and some endangered - are each minted in one troy ounce of pure silver! And each are found in vibrant full color on five different New Zealand postally mint stamps, each of a different denomination. Each set is hand-numbered on the cover of the accompanying 16-page, full color booklet, and each ancient giant kauri wood presentation case is likewise individually numbered. For a limited time, we're able to guarantee that your set will have a serial number below 100!

This set is a joint issue of the Reserve Bank of New Zealand and New Zealand Post. A Set Unlike Any Other! Philatelic - with a full color booklet. The oldest wood on the planet thrown in for good measure - the Giants of New Zealand Set is unlike any other collectible ever issued!

Let's start with the five different, specimen proof finish, one troy ounce pure silver coins. Five different giant New Zealand creatures, some extinct and some endangered, are depicted: Haast's Giant Eagle - extinct Giant Moa - extinct Colossal Squid - rare Giant Weta - endangered Southern Right Whale - endangered Each of these incredible beasts is also depicted in full color on one of five differently-denominated, legal tender New Zealand postal stamps. These mint-condition stamps are in protective holders inside the 16-page, vibrantly colored booklet that accompanies this set. Each booklet, printed on heavy card stock, is hand-numbered on the cover with its unique serial number. This same number is burned on the top of the solid wood presentation case. But this is no ordinary wood, this is 50,000+ year old wood from the ancient giant kauri tree.. Appropriately, the luxury presentation case is constructed from the timber of the now-extinct Ancient. Ancient Giant Kauri wood, long revered by the native Maori, is extracted from buried, prehistoric forests that grew more than 50,000 years ago.

Unearthed from peat swamps located in the North Island of New Zealand, this Ancient Giant New Zealand Kauri was left lying just beneath the surface of the ground. Sealed off from the air, these mammoth trees became cocooned, thereby remaining preserved. This ancient timber is believed to be the oldest workable wood in the entire world.

Now extinct, New Zealand's Haast's Giant Eagle. Was the largest, most powerful eagle the world has ever seen. Weighing in at more than 30 pounds, it was like a stone when it crashed down upon its favorite prey, the giant moa.

The giant eagle was an impressive hunter, diving on its prey from high tree branches at speeds of up to 80 kilometers per hour. Was the tallest bird in the world, standing up to 12 feet high and weighing about 550 pounds.

Incapable of light - it was the only bird with absolutely no vestiges of wings - it dominated the New Zealand forest ecosystem for thousands of years, until hunted to extinction by the recently arrived Maori about the year 1300 AD. And with the giant moa went Haast's eagle, as its preferred prey was killed off.

Is the largest invertebrate in the world, with one discovered specimen weighing in at over 1,100 pounds. It lives at depths of 1,000 meters or more in the great southern ocean, feeding on fish and other squid with the help of its huge eyes (the largest in the animal kingdom), its eight tentacles or arms, and two special, much much longer tentacles that are armed with sharp, swiveling "grappling hooks". And that's not to mention its huge, horned beak of a mouth. The eleven species of the nocturnal giant weta. Alive today are largely unchanged from their ancestors of the time of the dinosaurs, 190 million years ago.

Heavyweights of the insect world, giant weta can grow more than four inches long (body length exclusive of antennae or legs) and weigh more than 45 grams - making them the heaviest insects in the world. Too heavy to even jump, much less fly, these heavily armored (and armed - with spiky back legs and strong, hooked claws) lumber around on the ground. However, they're not carnivorous and they don't bite, sting or kick, eating mostly leaves, flowers and fruit. With their strongly arched mouths, lack of dorsal fins, and distinctively V-shaped blow hole sprays, Southern Right Whales.

Are easily recognizable when they appear around the southern coasts of New Zealand in winter. Once abundant, these huge (up to 60 feet in length), slow-moving animals were an easy catch for early whalers - who appropriately named them the "right" whales after hunting them nearly to extinction. Each coin features a detailed portrait of its respective giant animal, along with its name. Her Majesty, Queen Elizabeth II, in crowned profile facing right.

This portrait, featuring Her Majesty wearing a tiara and pearl earrings, was executed by the sculptor Ian Rank-Broadley. The legend ELIZABETH II and the date of issue also appear.

Each coin is encapsulated and housed inside an elaborate package. The luxurious clamshell-style presentation case (made from the 50,000+ year old wood from the ancient giant kauri tree) is lined with forest green satin and crushed velvet. The 16 page, full color booklet is individually number on the cover (as is the kauri wood case), and houses five different, mint condition New Zealand postal stamps, as well as details about each animal, specifications, and the official certificate of authenticity. Reserve Bank of New Zealand (legal tender coins) and New Zealand Post (legal tender stamps).

This item is in the category "Coins & Paper Money\Coins: World\Australia & Oceania\New Zealand". The seller is "talismancoins" and is located in this country: US. This item can be shipped worldwide.